Home > Kitchen > Hand Blenders: Cause for Concern
This content may include affiliate links. Purchases through these links earn us a referral fee at no extra cost to you.

Hand Blenders: Cause for Concern

A study released in October 2014 suggests that some hand (stick/immersion) blenders leak chlorinated paraffins, a type of chemical found in flame retardants, plasticizers, metal working fluids, and more. CPs are classified as toxic to aquatic organisms and carcinogenic to rats and mice. Short-chain chlorinated paraffins (SCCPs) are categorized in group 2B as "possibly carcinogenic to humans" by the International Agency for Research on Cancer.

Researchers at Stockholm University discovered the CPs while looking for environmental contaminants in cat food. The chlorinated paraffins showed up in disturbing amounts and were traced to in-house blending of the food, rather than to the food itself.

According to the study,

After re-analysing samples with and without the use of a newly bought hand blender used for preparing homogeneous cat food samples, we concluded that the hand blender caused the contamination. In addition, a small hole was drilled just above the mixer blades and content of the compartment drilled into was analysed and the presence of CPs was confirmed.

The European Union currently prohibits the use of SCCPs in products, and the Environmental Protection Agency has its eye on the potential hazards of SCCPs.

Do all brands leak CPs?

The research team purchased 12 hand-held blenders available in Sweden, as noted below.

Four of the brands did not show leakage: #3, #4, #7, and #8. The remaining brands showed leakage of SCCPs. One of the authors of the study, Ake Bergman, provided the following photo of the eight models showing leakage. 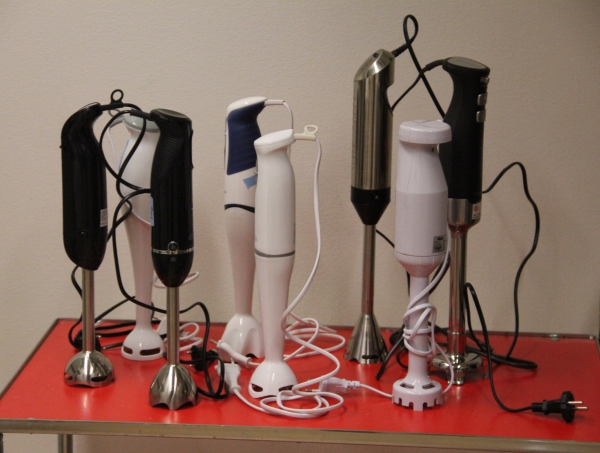 Of these eight models showing leakage, four were made in China. According to the study,

Four of the twelve hand blenders tested are produced in China, all showing leakage of CPs, and three of them were among the five showing the highest levels. China is also the major CP producer, with an annual production of over 600 000 tonnes in 2007.

When asked about the four models that did not show leakage, Dr. Bergman responded,

To the best of our knowledge the blenders not leaking CPs are to be regarded as safe.

What does this mean for brands commonly found in the United States like Cuisinart, Proctor Silex, Hamilton Beach, and KitchenAid? Further research seems to be in order.

This study offers a grim reminder that chemicals have found their way into virtually every aspect of our lives and vigilance must become a way of life. While complete avoidance of chemicals may not be feasible, we can become informed and make our purchasing decisions accordingly.

As the study concludes:

The results we are presenting in this screening study are unexpected and serious since humans eating food prepared using the hand blenders leaking CPs will become exposed to CPs. This is of particular concern since these types of household appliances often are used and recommended for preparing food for small children.

To read the Stockholm University study in its entirety, download the PDF report.